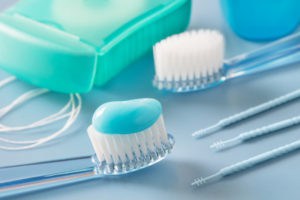 Oral hygiene plays an important role in healthy gums and teeth. With proper brushing and flossing technique, we can drastically reduce the amount of bacteria to prevent tooth decay, minimise tartar deposits and have a happy and healthy smile. But it doesn’t just stop at your smile! Studies have shown a link between oral hygiene, heart disease as well as premature and/or low birth weight during pregnancy.

The simplest way to keep your teeth clean and remove the majority of bugs that attach to your teeth and gums. Contrary to popular belief, the harder you brush does not equal cleaner teeth in some circumstances. In fact, this can cause harm to your teeth! ALWAYS use a soft bristle toothbrush, with a pea-sized amount of fluoride toothpaste. Aim to brush at a 45 degree angle near the gums as this is where the majority of bacteria gather. Remember, there’s three surfaces to all your teeth: Cheek, biting and inside surfaces.

“Why do I need to floss if I have my brushing perfected?” you might ask. Flossing plays an important role in cleaning all the bacteria in between your teeth. Bacteria are real introverts and love grouping up in small dark spaces in your mouth, such as under your gums and in between your teeth just under where they touch (and out of reach of your toothbrush). Cue: floss! Flossing helps disrupt these groups of bacteria and remove them, preventing the bacteria from causing decay and gum disease.

Sometimes the gaps between our teeth can be quite big, in which case we recommend using interdental brushes. These look similar to bottle brushes and help remove debris from places such as between the roots of molars.